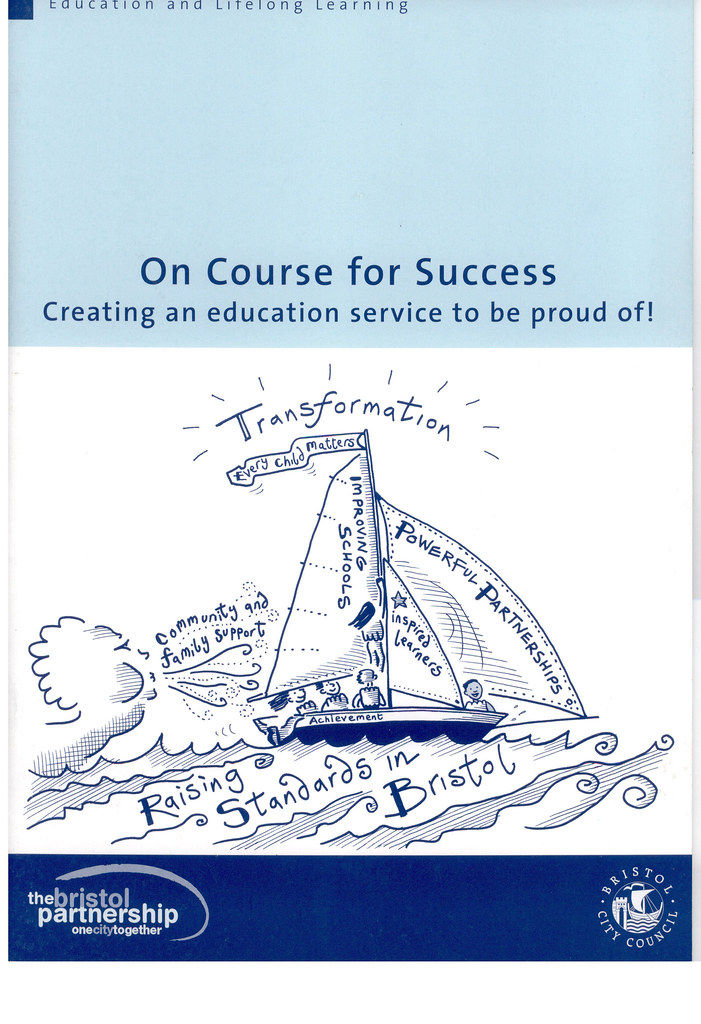 For old time’s sake here’s the cover of Education Director Heather Tomlinson’s original glossy leaflet – On Course for Success: creating an education service to be proud of! – published three years ago.

That rogue exclamation mark in the title now seems rather appropriate, cunningly foreshadowing the sheer comedy value of Heather’s doomed enterprise. It’s certainly not panned out too well really has it? Or at least it hasn’t for us or our children. Anyone out there feel at all proud?

We’ve now forked out around £0.5m to this directorial disaster plus, maybe, another couple of million to her various management subordinates and the revolving door of CONsultants she’s insisted on employing and the course we’re on is not the one even marked ‘vague improvement’ let alone ‘success’.

The embarrassing picture on the front of the leaflet, you may recall, was produced by Heather herself. £140k a year for someone to produce doodles straight out of the lower sixth is not great value for money really is it?

Although you should bear in mind that Heather is a keen yachtswoman. So keen in fact that when she left Nottingham Education Department for Bristol she told her former colleagues there that she was “looking forward to spending more time on her yacht”! No doubt that’s one promise she’s managed to keep.

Heather also wrote the introduction to the leaflet all by herself – or so she claims – and says: “We now know what works and what doesn’t work. It’s time to refocus all our efforts on those things that we know will have the greatest impact on achievement.”

COMING SOON: Truancy up! Results Down! That latest Tomlinson disaster in full – complete with excuses that need to heard to be believed!

2 Responses to Lest we forget