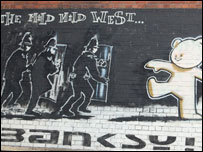 The picture on the left recently appeared on the BBC West website. Yet again their posh-boy journalists are trying to get all street and down with the kids on us by uncritically talking-up absolutely anything to do with the artist de nos jours Banksy.

We’re supposed to be getting excited now because Banksy’s popular ‘Mild, Mild West’ mural is going to be preserved behind glass and shoved in the atrium of some upmarket flats for yuppies being developed on Stokes Croft.

Just as Banksy must have wanted all along…

In a disturbing sign of what’s to come as Banksy is dragged more and more by the media into the mainstream for easy consumption, the BBC seems to have made a not-very-subtle alteration to the painting. Where’s the Molotov Cocktail the bear was holding gone?

Great. The BBC has decided to alter the whole meaning of the picture by crudely hacking off the end of it and then – to add insult to injury – set about making sure it’s “on-message” for the coppers:

They’re hilarious aren’t they riot coppers? A line of those comedians coming down the street at you and you know you’re in for a laugh…

This entry was posted in Banksy, Bristol, Developments, Media, Spot the difference. Bookmark the permalink.