It's official! Bus route is "quite loopy" 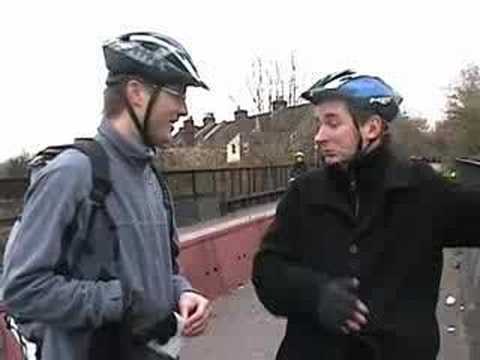 Bristol West MP Stephen Williams has slammed the plan to turn the Bristol and Bath Railway Path into a guided bus route as “daft” and “quite loopy”.

Williams visited the path, which is now in his constituency, during the morning rush hour last Friday with members of the Campaign to Save the Railway Path and was described by them as “amazed to see how popular the path actually is.”

Williams later told campaigners on Facebook (membership required) : “I rode along the path early this morning with some campaigners. There were lots of riders on their way to school and work and also lots of pedestrians. Mixing the path with a bus won’t work!”

There’s a brief interview with Williams from the Railway Path posted above.

Williams joins the slightly more circumspect Kerry McCarthy, Labour MP for Bristol East, who gushed last week on her blog: “I’ve joined the Facebook group ‘I do not want the Bristol to Bath Cycle Path to turn into a Bus Lane!'”

What is this with local MPs and Facebook? Are announcements on this private and exclusive membership only section of the internet for students of constitutional significance now? Why don’t they post their thoughts where everyone can see them?

Back on her blog, McCarthy went on to say slightly more ambiguously: “I hope a solution can be found that will meet our public transport objectives and keep walkers and cyclists happy.”

Bolton has also organised a motion to reject the bus route on the Railway Path at the next Full Council Meeting on 1 April. As things stand, it appears Bolton and the Lib Dems will vote to reject the plans while the views of the Tories and Labour (who together hold a majority on the council) are still unclear.

The Save the Railway Path Campaign now has a website that is available on the ‘Bristol Sites’ sidebar.

18 Responses to It's official! Bus route is "quite loopy"