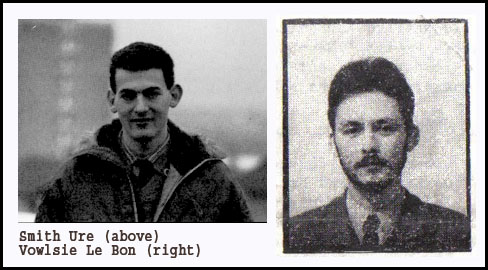 Rare photos of the cult Bristol 1980s synth pop act Electovox have emerged on the internet.

These pictures of bassist Smith Ure and drummer Vowlsie Le Bon are said to date from the 1987 – 1988 period when the band were in their pomp.

Described by someone close to the band as “a bit like Depeche Mode but more shit”, they’re best remembered for the “agit-pop” style independent singles ‘Visions in Green’ and ‘Red Monday’ on the local ‘Rubbish Leaflet’ label.

Both singles unfortunately went nowhere due, claimed the band, to poor marketing and management.

A photo has yet to appear of the band’s mysterious flame-haired, skirt wearing keyboard player, Kylie. But the two photos we do have will be sent to Bristol’s Museum’s Sarwat Siddiqui to form an exciting part of the council’s “memory collecting sessions” of the city’s 1980s music scene.

Electovox split in 1989 citing “political differences”. Smith Ure went on to have some success with Britpop act Blair whose 1997 ‘Relaxed and Filthy Rich’ LP is available in all good bargain bins.

Vowlsie Le Bon, meanwhile, gave up pop music altogether for a career in experimental atonal jazz. He currently plays noseflute with the Charlie Bolton Jazz Five, who are said to have a small committed following in the Southville area.