Lib Dems in office: Bishop in power: business as usual at the Council House 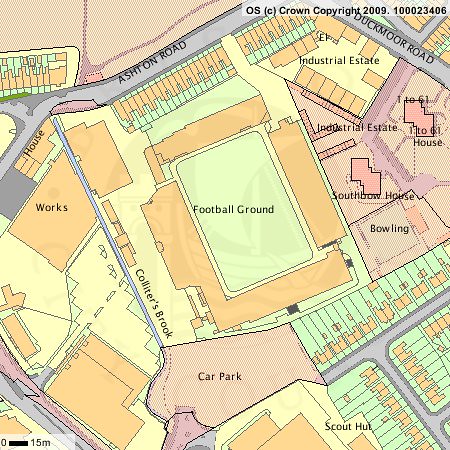 Minor uproar has greeted this blog’s revelations that almost a fifth of the land at Ashton Gate pencilled in by Bristol City FC to become a Tesco Extra belongs to Bristol City Council.

And even by the extraordinarily low intellectual standards displayed by Bristol City Council senior officers, this hare-brained scheme to give away a two acre car park at Ashton Gate to multi-millionaire City Chairman Stevie Lansdown without anyone noticing operates at an entirely new level of stupid.

The fact that the land is openly listed in Lansdown’s Tesco planning application (pdf) as city council land and features on the council’s publicly accessible ‘pin-point’ map of council-owned land (above) seems to have entirely escaped the combined brains of the council’s planning department, who have apparently been quietly negotiating their “secret” land giveaway since January.

And you don’t have to look too far to discover the council officer responsible for trying to do a multi-million pound favour for a wealthy developer with our land.

Lansdown’s planning application also tells us that from February to July 2009 the applicant (i.e Lansdown) was receiving pre-application advice in the form of meetings and correspondence with planning officers Richard Matthews, Zoe Willcox and … Wait for it … David “The Bald” Bishop.

And rest assured Bishop must have known all about this land. This comes from the UK Planning Portal:

“Anyone can make an application, irrespective of who owns the land or buildings concerned. However, if you are not the owner, or if you have only part-ownership, you have to inform the owner or those who share ownership, including any leaseholder whose lease still has seven or more years to run, and any agricultural tenant.”

Bishop must have known then. This is, of course, exactly the same David Bishop who was caught selling protected public park land over the telephone to Merchant Venturer George Ferguson just last year.

So the city’s Lib Dem leadership – who appear not to have been told about the Ashton Gate land by Bishop – can’t say they weren’t warned can they?

Now – surprise, surprise – the Lib Dem administration are right up to their necks in it.

Having spent 3 months assuring us that the Ashton Gate Tesco was solely an issue for the “quasi-judicial planning process” over which they have no influence, we now learn that they have to take a highly controversial and unexpected political decision at short notice on whether they sell our land to Lansdown or not.

Once again Bishop’s been allowed to brazenly manipulate the city’s democratically elected representatives and its citizens into a corner on behalf of a wealthy local developer.

And just like the Chocolate Factory, he’s deliberately planted a controversial public land sale bang in the middle of the planning process, leaving politicians with little time or room for manouvre and under huge pressure from – on one side – financially powerful developers with legal muscle and – on the other side – the public.

I wonder, how long will it be before we start hearing about an “in principle” agreement to sell the land is in fact in place after Bishop’s various discussions with Lansdown over the year? On what other basis would Lansdown have put in a planning application on the land?

Although surely, as with the Chocolate Factory, the Ashton Gate car park sale should have been decided long before a planning application ever saw the light of day?

Why didn’t our politicians ensure this Ashton Gate land deal was sorted and above board after the well-publicised and highly embarrassing Chocolate Factory debacle? Instead they seem to have let Bishop’s sharp practice go completely unpunished on that occasion, no doubt giving the slimeball the impression he was untouchable.

It rather suggests our politicians are not really in control of this city and they are definitely not in control of the city’s Head of Planning, David Bishop. Perhaps they should have just got rid of him when they had the opportunity last year?

The Lib Dem leadership, meanwhile, appears to have disappeared into a bunker to lick their wounds and study plans to figure out exactly how far up the garden path they’ve been led by their own officers. I wonder when they’ll get around to telling us what deal David Bishop’s negotiated for us on the quiet with Lasnsdown?

Meanwhile yesterday, Jon Rogers surfaced on Tony D’s blog claiming that the public had been fully CONsulted on and informed about this land sale.

An extraordinary piece of baloney considering Rogers and the Lib Dems are yet to even get around to formally acknowledging they own this land let alone formally announcing it’s on sale.

Does Rogers think a story last Sunday on the Bristol Blogger now constitutes a formal Bristol City Council announcement? Is the pressure driving Rogers even more bonkers than he was already?

35 Responses to Lib Dems in office: Bishop in power: business as usual at the Council House