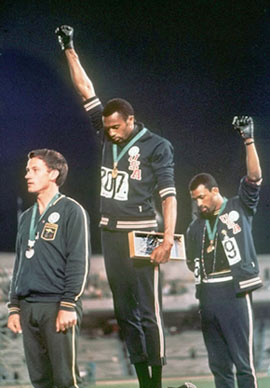 Apparently the Olympics are on. So to fulfill my blogging contractual obligations I’m doing a post on it.

Comrade Bone already seems to have produced the quote of the fortnight:

I absolutely refuse to cheer on anyone called PIPPA – so that rules out all our equestrian toffs. I’ve yet to see anyone off the local estate pop out for a spot of ‘three day eventing’ or ten minutes of ‘dressage’.

So instead I thought I’d focus on some truly great Olympic moments. Except the only one I can really think of – with the possible exception of Steve Ovett gloriously beating that smug Tory git Sebastian Coe in the 800m at the Moscow Olympics – is Mexico City ’68 when US athletes Tommie Smith (picture above, centre) and John Carlos (right) delivered black power salutes from the victory podium for the 200m during the US anthem.

This caused quite a big stir in its time.

Carlos went on to say it was “for those individuals that were lynched, or killed that no-one said a prayer for, that were hung and tarred. It was for those thrown off the side of the boats in the middle passage.”

While Smith said, “”If I win, I am American, not a black American. But if I did something bad, then they would say I am a Negro. We are black and we are proud of being black. Black America will understand what we did tonight.”

It’ll be interesting to see if today’s pampered, steroid-fuelled automatons can muster anything of even vague political significance in protest at the shitty little regime of this year’s Olympic hosts, China.