Fellow travelling with Stop the War 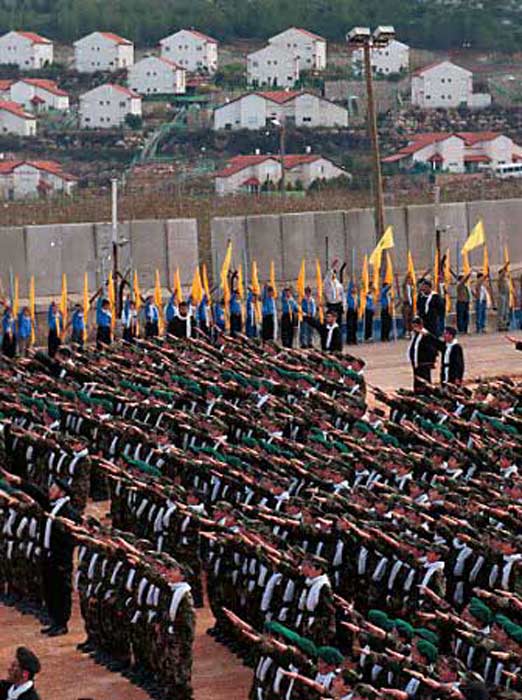 Some Hezbollah paramilitaries making that internationally recognised sign of peace and goodwill. The town in the background is Metula, in the north of Israel.

Another sign – as if it were really needed – of the collective madness of the inaccurately named national Stop the War Coalition and the lunatic tendencies overtaking many of its supporters on what was once known as “the left”.

Now it looks like the Bristol Stop the War Coalition have joined the Al-Looney Brigade too as they’ve only gone and invited Ibrahim Mousawi to speak at the Council House at an event they’re calling “World Against War” – Uncensored Voices From The Middle East.

Bristol Stop the War bill Mousawi as the editor of Al Intiqada, “a journal linked to Lebanon’s Hezbollah”. This is not the whole story however. Far from being a simple Lebanese journalist visiting the UK to provide us with some objective information, in Arabic versions (pdf) of Stop the War’s publicity he is being more accurately described as the “spokesperson for Hezbollah”.

Hezbollah are of course the Lebanese Islamist paramilitary organisation which just last week was again declaring an open war on “Zionists”. They are also a bunch of unapologetic anti-semites and notorious holocaust deniers who regularly flag up their genocidal ambitions with ever more deranged calls for the violent destruction of the State of Israel.

Meanwhile their leader Hassan Nasrullah’s efforts to “stop the war” include public statements like “If they [the Jews] all gather in Israel it will save us the trouble of going after them on a world wide basis.”

The sort of comment, in fact, that many dispassionate observers might perceive as a recipe for endless war rather than a means of stopping it. But hell, what would they know?

Hezbollah are also obsessively keen on Samir Kuntar. If you don’t know who he is, Harold Evans at Comment is Free explains while also managing to recreate some of that feverish emotional intensity that underpins so much of the violence in the Middle East. An intensity that is constantly and cynically manipulated by the propagandists of violence – such as Mousawi and his supporters – on both sides of the conflict. Evans is also worth reading as he provides a brief masterclass on the simplicity of good journalism.

Mousawi is appearing at the Council House next Friday 29 February 2008 at 7.30pm. Wouldn’t it be great if at least one city in the UK could organise the kind of welcome a murderous, hate-filled scumbag like Mousawi really deserves?

22 Responses to Fellow travelling with Stop the War