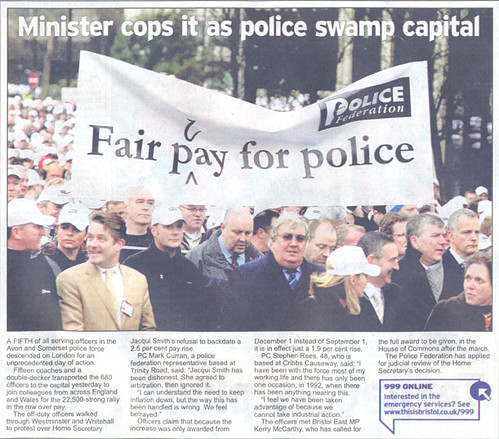 Yet another fine day’s work at the Lubianka …

Now editor Mike “News Bunny” Norton was never likely to pass up the opportunity to provide some free positive PR to the boys of the Avon & Somerset Police Fed in this morning’s edition of the Cancer was he?

So long-suffering readers turning to page 5 of the ailing rag were dished up a suitably anodyne report of yesterday’s damp squib police march in London.

Their story, obviously cooked up last night in the comfort of Norton’s news room some 120 miles away from the march, was the predictable brew of hype and cliche we’ve come to expect from the Cancer on the coppers

While gushing over our 650 brave local bobbies – who apparently managed to get all the way from Hyde Park Corner to Westminster without stopping for doughnuts or writing off a police car – no room was found in the paper for the uncomfortable truth that this poor hard-done-by bobbies’ march was led by a senior member of the BNP and defied the very SOCPA laws the coppers are happy to violently uphold on most weekends while trousering generous overtime payments.

However, in future perhaps Norton or someone in his news room should actually read the news before trying to publish it. Or at least make the effort to look at the front page of their sister paper, The Evening Standard, before using their photos in their own paper to save themselves a few quid.

For the photo chosen to illustrate Norton’s Police Fed PR puff clearly shows BNP mayoral candidate, Richard Barnbrook, leading our brave local bobbies toward Parliament just as The Standard had reported with some dismay on its front page illustrated with the very same picture yesterday.

So well done to News Bunny Norton and his news room boys. Not only have they failed to mention that 650 local coppers were marching through London while being led by a notorious racist and senior member of the BNP but they’ve also delivered the BNP with some much needed positive publicity and credibility in the lead up to London’s mayoral elections.

No doubt Nick Griffin, Barnbrook and the rest of the BNP leadership are cock-a-hoop at Norton’s generous and uncritical photo-coverage. Just as they must have planned it in fact!

Whether the News Bunny has now taken to supporting the notorious crypto-fascists of the Police Fed who have been providing a robust “no comment” – rather than a condemnation – to the press all day on the matter of Barnbrook’s attendance on their march or whether he’s simply running a hopelessly incompetent news organisation incapable of even the simplest of journalistic checks is not clear at present.