The last days of the Heathersreich 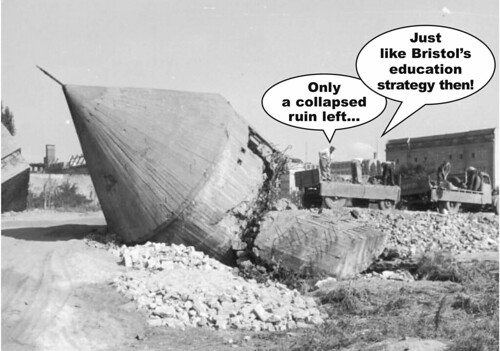 Sounds like it’s beginning to resemble the fall of Berlin in the Tomlinson Schoolzbunker at the Council House.

Our man with the password to the server in Bristol’s Education department says that Herr Direktor Heather Tomlinson is now so paranoid about The Bristol Blogger that orders have been handed to her IT people telling them to convince employees in her department that their internet use is now being closely monitored to see exactly who is accessing this site from Bristol City Council PCs during work time! Ho, ho, ho.

Heather, for christ’s sake get a grip girl. This is Bristol not China. You are a hopeless local government officer working for Bristol City Council not a senior communist party official and it’s the fucking internet and you can’t censor it or stop your staff looking at it you daft sod.

It makes you wonder how much longer this hopeless paranoid can last in post now. Will she finally do the decent thing and go quietly of her own accord? Will legal eagle Stephen McNamara be quietly distributing the cyanide capsules? Or perhaps Helen Holland will be tasked with handing her the ivory handled revolver? It’s only a matter of time now Heather . . .

You have completely and utterly failed. Your record proves it. For god’s sake go now with some shred of dignity. If not, you will be made to go in the most undignified circumstances imaginable.

COMING LATER: ‘Day 4 of my experiment’ – an update on where we’re at with the e-democracy petition to get rid of hopeless Heather.

2 Responses to The last days of the Heathersreich