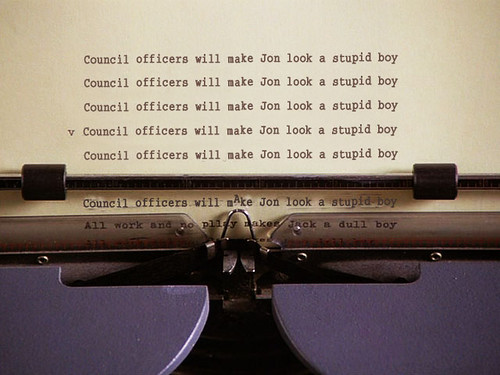 They say a week’s a long time in politics but it’s a very short time indeed for the Lib Dems’ Planning and Transport supremo, Jon Rogers, to make a complete nob of himself and demonstrate he’s a disempowered old fool running a shambles of a department on hot air alone.

Can it be just last week that the mad doctor was frothing, fulminating, pompously pontificating and madly CAPITALISING on this very blog?

Planning is INDEPENDENT of the executive

He thundered at us. Ooh er, missus!

the Bristol Blogger has, once again, served up an unnecessary, unpleasant and inaccurate slur.

One part of my portfolio is to review how the planning officers tackle applications. They do seem to me to be scrupulously open and transparent.

How can this be? The city’s ‘scrupulously open and transparent’ council officers not bothering with planning permission for themselves? Shurely shome misshtake?

Dearie me, what is going on in Jon’s department? First he cheaply gives up the city’s greenbelt he was elected to protect and now we find his officers and his boss openly abusing the planning system he runs.

Meanwhile, Jon, an avid Twitterer and internet PR buff, seems to have temporarily dropped from view. Where could he be? Is he alright? Or is it time he got on that bike for good?