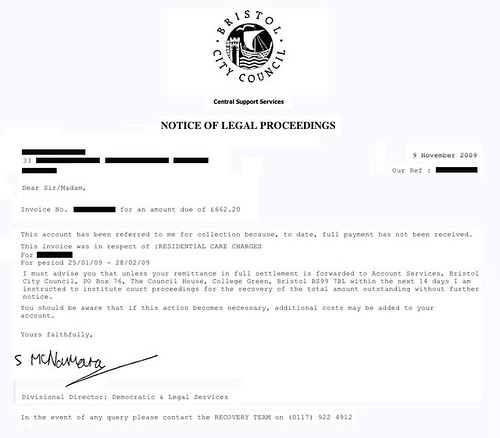 The bewigged anti-human fool that passes for a legal expert down at the Counts Louse, Stephen McNamara, excels himself again.

Now the man that took council behaviour to a new low in 2005 when he personally patrolled the entrance to the Counts Louse to prevent learning disabled protestors from using the council’s toilet facilities when they campaigned outside over the loss of their daycare services has dreamed up a new wheeze.

Because he’s only gone and started legal proceedings against families who made allegations that their elderly relatives were being abused in Mimosa‘s Kingsmead Lodge care home!

Apparently the brilliant lawyer has decided, in all his wisdom, that these relatives – who had to pull their elderly parents out of Mimosa’s ‘home of horrors’ – should pay up for the dubious ‘care’ their relatives received at the hands of the council’s controversial private elderly care providers who are still under serious investigation over their conduct.

The Blogger’s assured that McNamara will be receiving a suitably robust response to his latest idea in the next few days.

Looks like the Mimosa soap opera is back then.