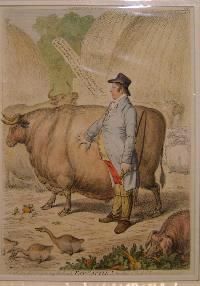 I say chaps. Have you heard yet? Spiffing news what?

Those jolly good fellows of the South West Regional Development Agency have only gone and got themselves a terrific new Chairman chappie don’t you know?

Naturally such a character, responsible for deciding how a couple of hundred million pounds of public money is spent in the region each year, shouldn’t have to be put through anything as hugely boring and tiresome as a democratic election like the plebs have to.

So welcome aboard Sir Henry William Studholme, 3rd Baronet of Perridge. Henry – or Harry to his friends – attended Eton School and Trinity Hall, Cambridge and is described as the owner/manager of the Perridge Estate, Devon, a business which includes a 350 acre farm, 650 acres of woodland, and both residential and light industrial property letting.

Completists might be interested to hear Grandaddy Studholme was the illustrious Sir Henry Studholme,1st baronet and MP for Tavistock until 1966 when he was replaced by Michael Heseltine.

The current Baronet’s club is Brooks’s if you’re up in town and fancy a quiet chinwag over a glass of port to learn how Harry might be able to help you out with the public’s money.

Tally Ho! And hurrah for meritocracy!