Spirit of the age? 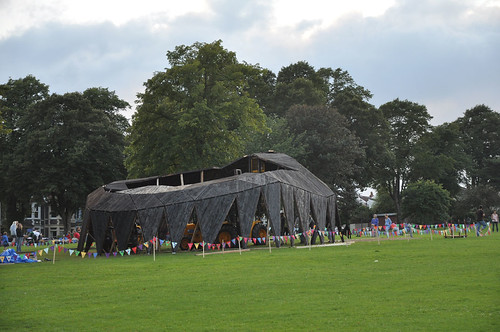 So locals now have a weird state-sponsored miserabilist temple of environmental doom in their kids’ local park for the summer holidays. Yipee! Or should that be Hippy?

Now first up, if a bunch of hippies want to build a shed in the middle of Victoria Park so they can invite their mates in to talk anti-modern claptrap about the environment and the end of the world they’re quite welcome to … If it’s at their own expense.

But why should we pay for it? And if we do have to fork out in the name of cultural improvement for all, why can’t the money at least be spent on people who aren’t fringe loonies with a fruitcake agenda?

Because rest assured, the people behind this – “internationally acclaimed artists Heather and Ivan Morison” – are fringe loonies.

This becomes immediately apparent if you leaf your way through any of the three leaflets, available at the park yesterday, published to accompany their shed building enterprise. Presumably because expending as many resources as possible explaining your urgent environmental message is OK then?

And what do these two artists have to say for themselves?

The Morisons’ art practice involves activities as diverse as gardening, kite flying, science fiction writing, anthropology, skywriting and for the past four years, the development of an arboretum in Wales.

Really, does anyone, anywhere, outside the slightly odd public sector environments of UWE and the council – who are funding these people – take a couple of wealthy hippies flying kites as “art practice” seriously?

But let’s move on to glean what we can about the structure of their structure from their voluminous publicity. Not surprisingly it’s mainly high-end dippy hippy drivel that leaves no cliché unturned:

The artists chose the shabono, a circular structure built by the Yanomamo Amer-Indians from the Amazon, as a starting point for the oval form of The Black Cloud.

Well you would wouldn’t you? Because if you’re looking to build a shelter from apocalyptic environmental catastrophe, you’d immediately turn your back on your own culture that can produce nuclear bomb proof shelters and instead consult the collective wisdom of an obscure South American indigenous tribe.

After all, there’s so much we can learn from them isn’t there maaaan?

But perhaps it’s best not to dwell too much on the finer detail of high-art apocalyptic shed building. Although you might like this one: the shed, we’re told, “is built entirely from timber harvested from the artists’ Welsh arboretum.”

Fabulous darling! Do you get a free arboretum with every council flat in Wales these days then? Possibly not, as it doesn’t sound like our struggling artists are working out of a Swansea estate:

For the last two years, they have been creating a series of ‘Escape Vehicles’. These are buildings, vehicles and structures, which explore the human desire to escape the modern world along with our interest in imaging (sic) future catastrophes

Really? I must have missed this headlong rush of the masses to escape the hell of longevity, nourishment, relative wealth, dental anaesthetic, foreign travel, immunisation, central heating and the rest of the trappings of the modern world.

Are Heather and Ivan maybe mistaking their and their privileged mates’ slightly off-the-wall desires with everyone else’s?

Who knows? Not sure Heather and Ivan do actually. Because does this desperate desire to escape the modern world only kick-in once Heather and Ivan have cleared their shed building site of the heavy machinery and power tools they used to build it in the first place?

I think we should be told. And you might well be if you’re in their Guardian reading target market and fancy spending a few hours listening to Heather and Ivan and friends in their new shed.

Get down to Victoria Park on 5 September for their ‘How to Prosper During the Coming Bad Years’ (get a lucrative public art commission? Ed.) workshop exploring nothing less than “the future of humanity” with Heather, Ivan, science fiction writers, future thinkers and environmental campaigners.

Personally I think I’ll be going down the pub and watching the football instead.

122 Responses to Spirit of the age?