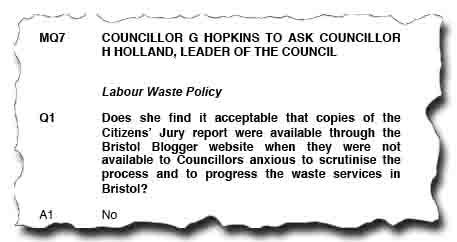 We will, of course, not rest until we have been condemned in the house!

They were actually quite an interesting set of questions from Hopkins, who managed to discover that Labour’s much-publicised claim that the Citizen’s Jury would cost just £45,000 was total bullshit:

When answering questions on the cost of the Citizens Jury previously we were given a figure of £45,000 as the total cost. However further questioning of officers has revealed that this completely missed out officer’s time and internal costs. Was that a legitimate omission given it was said officers average cost was £40 an hour when Councillor Eddy and Councillor Bees were trying to stem the flow of legitimate questions that you had no answers for?

And council leader Helen Holland’s response to a request for details of what the real cost of the jury might be is a real gem:

Requesting that officers spend valuable time detailing actual hours spent on the Citizens Jury process, would not be a valuable use of resource.

Can you come again with that one please Helen? Requesting that officers spend valuable time detailing actual hours spent on their work would not be a valuable use of resources.

We seem to be being told here that our council officers, as a matter of course, are not expected to record or detail in any way the time they spend doing their work! How then do they monitor expenditure at the Council House if they don’t know what anyone’s doing and how long it takes? And how are they monitoring staff performance?

No wonder they’re all unsackable – according to the council boss absolutely basic levels of staff performance management, in defiance of every known principle of mangement, simply do not happen at Bristol City Council. No one knows what the fuck anyone’s actually doing all day because, apparently, it wouldn’t be a valuable use of resources to find out. Honest guv!

Talk about hand your staff an idlers charter to do what they like. Would you run your business like that? Without having a clue what your staff are doing all day? Or whether it was being done competently? Or have any means of finding out? What a fucking joke.

On Mr Kent’s Myspace internet blog, he said the gay men were also acting wrongly, and he thought the firefighters’ punishment was harsh.